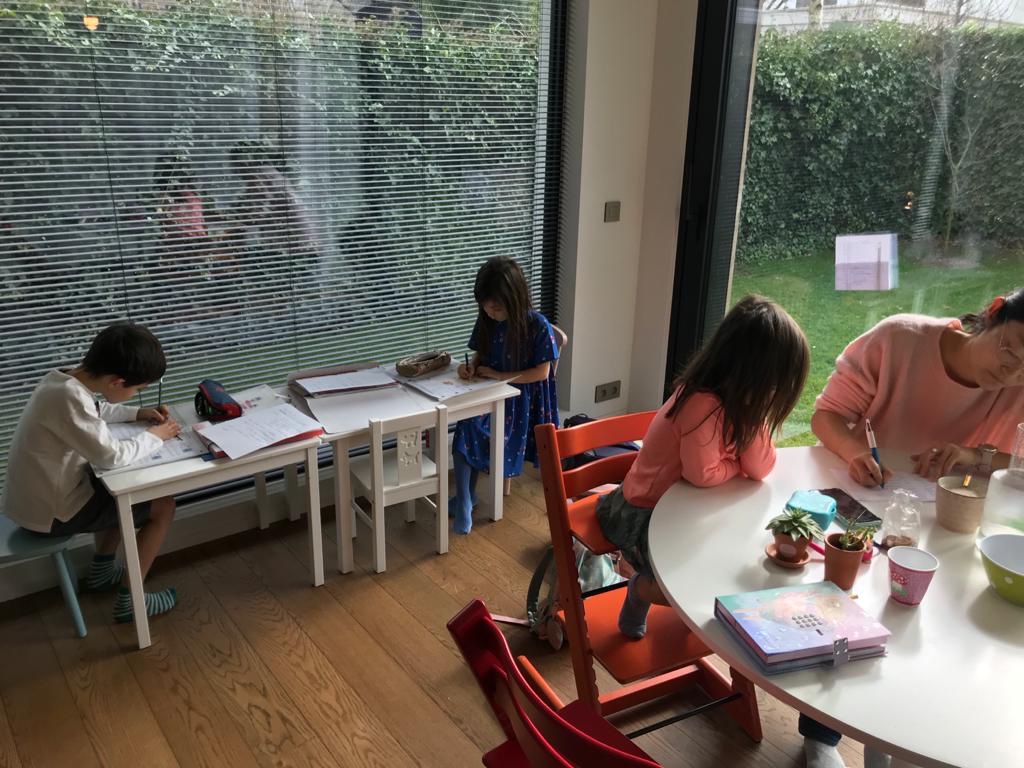 These are peculiar times we live in…being at home with our family of five for a few weeks, homeschooling the kids and working from home at the same time, it’s definitely a first! The hubbie and I drafted a day planning for the kids but we’re flexible. If the kids are playing when it’s actually time for a walk, obviously we’re letting them be so we can actually get some work done. Or if they’re being a pain when we’re both in a meeting, they will have screen time, whether it’s on the planning or not. They are getting more screen time in general so I’m not expecting any complaints in that area. Desperate times and all that. Part of it will be educational though such as working on the online learning platform or watching informative movies. This last one is new for all of us so imagine our surprise when we caught our 6- and 7- year old very attentively watching a short movie on verb conjugation…in French…Of course, we prefer not to have them in front of a screen 24/7 so we do try to offer them alternatives for when they’re tired of playing: listening to fairy tales or audiobooks, drawing with pavement chalk, writing letters to family and friends. I’ve also suggested they each make a drawing to send to the people living in the local retirement home but I’m afraid they need some more encouragement for this one…though my middle one already wrote a short note ‘hello madam or sir, I am Sienna” 🥰. We foresee some time each day to do some homework, even for the toddler! And two outdoor activities, for as long as we’re allowed outside that is. There are very few people walking around in our neighborhood these days but the few people we pass, cross the street when they see us coming. I’m trying not to take it personally 😄. We did an alphabet walk earlier today where you look for things during your walk starting with the different letters of the alphabet. The things you find on the world wide web…what to do with kids inside/outside, tips on homeschooling, learning how to be more patient, all just a mouse click away.

Work-wise, luckily I’m used to working from home so my home office is all set. The hubbie on the other hand, rarely works from home and when he does it’s at the kitchen counter. With three little ones who have taken over the living area, he has now been confined to the make-up table in my daughter’s bedroom 😊. So he is sitting within hearing distance from my office but at the volume he is doing his calls, everything would be within hearing distance 😉. We’re both working flexible hours, starting before the kids are up, alternating time with the kids, continuing after the kids have gone to bed. And so far, so good…but then again, today is only Day 2 of many more to come! At least we got some work done, though I must admit I haven’t been very productive. And I think that’s okay. I’m trying to lower the bar in general to manage my own expectations. Being at home with my family 24/7, I know I will not be as efficient as I want to be around the house or on the job. But staying at home with my family also has its advantages. There is little or no time pressure for the kids. If they want to take it slow during breakfast, that’s fine. They get to wear what they want because I’ll be here to make sure they are dressed appropriately before they go outside. That’s not entirely true actually, I’m also trying to work in the meantime. So I’ll be yelling at them from the other room to put on shoes and a coat before going outside (into the garden that is, I’m not letting them roam the streets just yet and especially not now) only to see that when they come back in they were wearing neither 🙄 …so this is actually a downside of working at home with kids, some things get overlooked like the fact that they have been in front of the television for hours. Anyway, I was talking upsides. Not having to pressure my kids means a whole lot less drama as in almost none (almost…). I could so get used to this. Not having to go anywhere is nice. I haven’t been in a car for five days! Can you imagine?! I’m used to driving on a daily basis, to school, to the store, to work, to meet with friends, and always in a hurry somehow (well, I usually leave the house just a wee bit too late). Now, none of that! Not having the option to go anywhere is nice. There is no need for FOMO because there is nothing to miss out on 😊. My calendar is empty, no driving the kids to birthday parties or swimming lessons, no appointments at the hairdresser or the dentist, no evenings out with friends, and though I miss all the social activity, seeing and talking to people, it also brings me peace and quiet. Now there’s a silver lining 🍀

2 thoughts on “Parenting during a pandemic”